The ICC Men’s T20 World Cup 2021: USE MoneyGram via payit and Win a Ticket to Watch Live Cricket 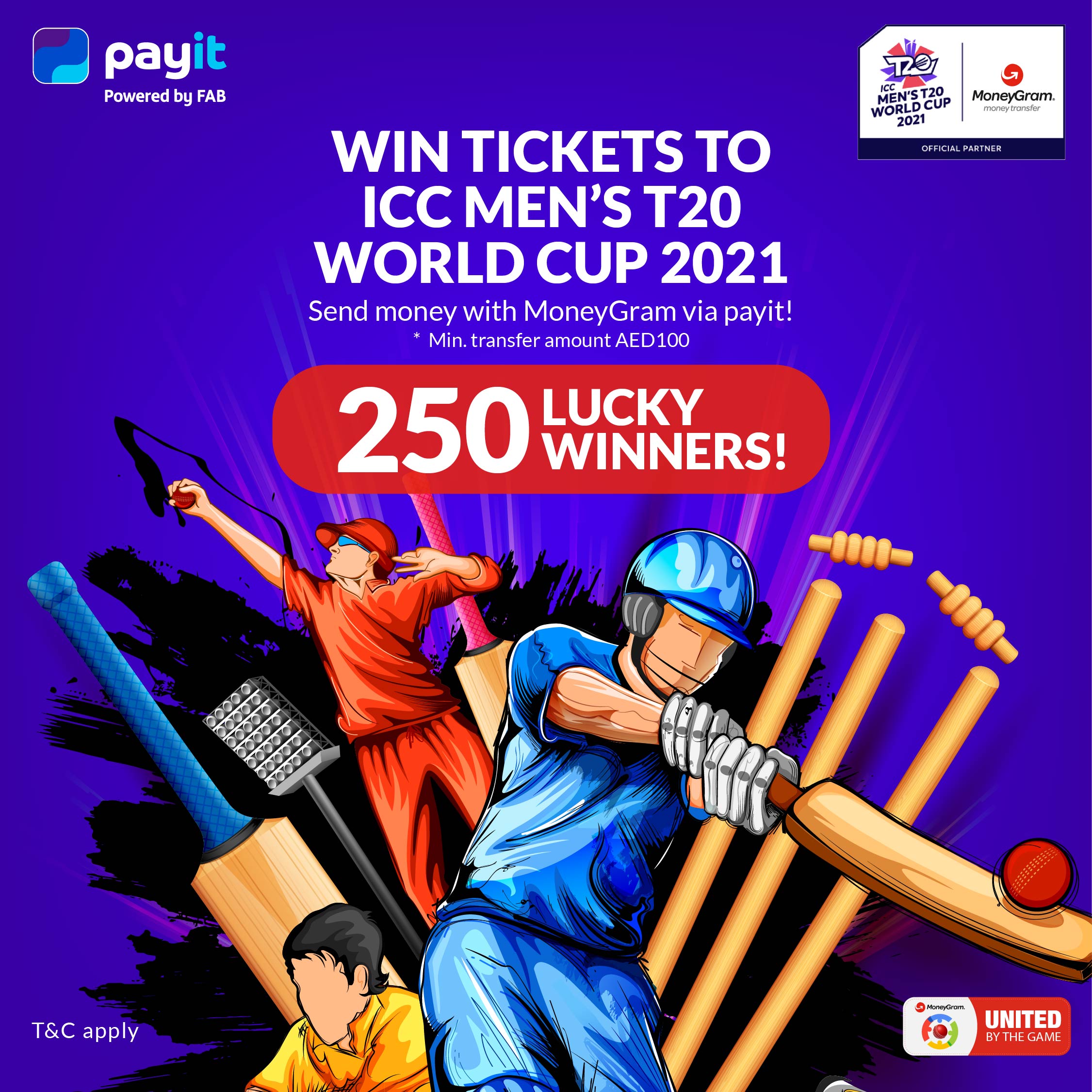 It’s that time of the year again, and we’re looking forward to another international cricket tournament. The ICC Men’s T20 World Cup 2021 will start from 17th October to 14th November 2021.

It’s that time of the year again, and we’re looking forward to another international cricket tournament. The ICC Men’s T20 World Cup 2021 will start from 17th October to 14th November 2021.

At first, the event was set for India. However, there’s been a venue change due to the ongoing COVID-19 situation. As a result, the entire event transferred to UAE and Oman.

This time will be different if you want to get your hands on ICC T20 tickets, As payit will offer 250 tickets to 250 lucky winners this tournament to watch cricket online.

Keep Reading to see how you can enter the draw.

What was once England’s national sport is now a global sport with multiple powerhouse countries. The world is ready to watch Australia, India, Pakistan, New Zealand, and England duke it out during the upcoming tournament.

To begin with, cricket is a game of strategy between two teams. It is a bat and ball game played in an oval field, with a rectangular area known as the pitch in the middle. The pitch needs to be 20.12 meters long and 3.04 meters wide.

Each team bats and fields in turns; the goal for the batting side is to score as many runs as they can, while the fielding or balling side will try to stop them. There are two sets of three wickets set in the ground on both sides of the pitch.

Along the top of each wicket, there’s a horizontal piece which is known as the bails. If the bowler manages to hit the wicket and knock the bails off, the batsman is dismissed. The purpose of the game is to score more runs than the opposing team.

From a lighthearted game on the beach or in the neighborhood to the intensity and endurance of an international Test match, cricket is played, watched, and loved by tens of millions of people worldwide.

It’s an exciting, crushing, and intriguing game with a unique style that’s gaining in popularity.

Many experts believe that cricket was invented during the “Saxon or Norman” times around a millennia ago by children in the southeast of England. The first record of cricket being played as an adult sport was in 1611. Later on, nobles favored the game, and it has since gained England’s national sport status. Cricket has earned its position in the international arena after a century.

How To Play Cricket?

It is super simple to play a cricket match in your backyard, street, or anyplace with ample open space. All that is needed is a ball, a bat, and something to use as a wicket. However, it’s important to note this is only a casual game for your friends and family.

Cricket as a professional sport is far more complex and intricate than it may seem. Don’t worry about it, as this article will explain the professional side of things in detail.

As mentioned before, the teams will take turns at batting and bowling. Each turn is called an “innings.” It is always plural. Teams will have 1 or 2 innings each, depending on which format is played.

As cricket has developed over the years, it is played formally in three formats: Test, One-Day, and the latest format, Twenty20.

The oldest and most elite game format is known as test cricket. It is usually played over five days. Four innings are played in each test match, which means both teams bat twice and bowls twice. The winning team is the one that scores more runs in their two innings.

One-Day International (ODI) is a game format that involves both teams playing one inning each. The innings consisted of 50 overs, and the match can last up to nine hours. This format is popular amongst fans as it provides a greater balance between the two disciplines of the game. It sits in the middle; it’s not as slow as the test format and not as fast as the newly developed Twenty20 format.

The newest format of the game, Twenty20 or T20 cricket, is the shortest and arguably the most exciting format. Each innings consists of 20 overs, which means that a single match can be three hours long.

The shorter format encourages teams to play on the front foot and play exciting cricket. Some of the most exhilarating cricketing moments of the last decade have come through the T20 format.

With the T20 world cup 2021 just a few days away, let’s take a look at the cricket team in a bit more depth.

How Many Players In A Cricket Team?

Each side will field eleven players in a standard cricket match, with one player from each team being the captain. Each team will also have one wicketkeeper.

The composition of the team essentially depends on the strength of the country. For example, countries like India and England boast very deep batting lineups, whereas countries like Pakistan boast more bowlers. So it’s essential to find the right balance.

When Is The Next Cricket World Cup?

The next ICC T20 world cup isn’t very far away, it starts on 17th October and will end on 14th November. However, the format of this edition of the T20 World Cup is slightly different.

The ICC confirmed that there would be a round 1, which will start with eight teams. These eight teams will play 12 matches between them across two groups of four.

One of the venues of the two groups will be the UAE and the other in Oman. Viewers in UAE will watch live cricket between; Bangladesh, Sri Lanka, Ireland, Netherlands, Scotland, Namibia, Oman, and Papua New Guinea.

Out of these teams, four will progress to the Super 12s. Aside from these four teams, the super 12 will also feature the top eight ranked T20i teams in the world. There will be a total of 30 matches in the Super 12s phase.

All of the matches are scheduled in the UAE and will commence from 24th October. In the super 12, teams will be split into two groups with six teams on each side. All the matches are to be played on three venues in Dubai, Abu Dhabi, and Sharjah.

After the super 12 phase, there will be three playoff rounds, two semi-finals, and to end the tournament, the final!

Who Are The Most Popular Cricket Players In 2021?

Even though cricket is a team sport, there are some individuals that manage to garner more attention than others. Here are some of the most popular cricketers in the world that you can catch at the T20 world cup.

One of the silkiest batsmen to ever come out of Pakistan, captain Babar Azam is a joy to behold.

By the end of his career, Dawid Malan might go down as the greatest T20 batsman of all time.

Australia’s Aaron Finch is ready to make all the bowlers coming to the tournament pay. His aggressive style is sure to draw many eyes.

What Stadiums will host T20 World Cup In UAE?

There will be three main venues for the ICC T20 World Cup in the UAE, and they are as follows:

If you want to watch the world cup T20 in UAE, you need to get tickets, and one of the official sponsors for the tournament this year is MoneyGram and as payit is a MoneyGram partner, we are offering you the chance to win tickets to the T20 World Cup 2021 via a competition starting 28th September, 250 lucky fans will win the chance to watch cricket live this time.

To enter T20 World Cup 2021 MoneyGram & Payit’s draw and enjoy live cricket online, all you need to do is make a money transfer with a minimum of AED100 through these simple steps:

– Download payit app for free on Android or IOS and Huawei App Gallery.
– Use a valid Emirates ID & active Mobile number, to complete your registration on the
app.
– Link your bank card to your payit app.
– Use payit wallet to send money to your home country using MoneyGram feature on
payit app.

Where To Watch Live Cricket Matches?

You can watch cricket matches on different platforms. One of the fastest-growing methods is to watch cricket online. There are so many different streaming platforms available that you can use to view all the matches that you desire.

Alternatively, the matches will also be airing on almost every major sports channel, so there are plenty of options available.

Nothing matches up to the excitement of an international cricket tournament, and Moneygram with payit are making it even more interesting by starting a draw. Around 250 people have the chance to win tickets and watch live cricket.